You are in the role of ‘witness’ to a plus-one process. Your task is to develop a reading of the dilemma implicit in the original situation and to form a hypothesis about its underlying impossibility.[1] The repeated way this situation may occur reflects the way the larger environment ‘sets it up’ by the way it holds it.[2] A forensic process aims to understand the means, opportunity and motive for such repetition.  Your task as a ‘witness’ involves the following steps:

The mutually exclusive nature of the frames emerging from the plus-one process raises the question of how the oscillation between them is ‘held’ by the larger environment. This ‘holding’ refers not only to the resourcing available from the larger environment (with all the attendant constraints that this resourcing imposes), but also to “the management of experiences that are inherent in existence”,[11] such as the completion (and therefore the responses to non-completion) of processes as defined by that larger environment.

Notes
[1] What we want to get to is a formulation of the dilemma implicit in the situation and its underlying impossibility.  To do this we work with the following dilemma template: 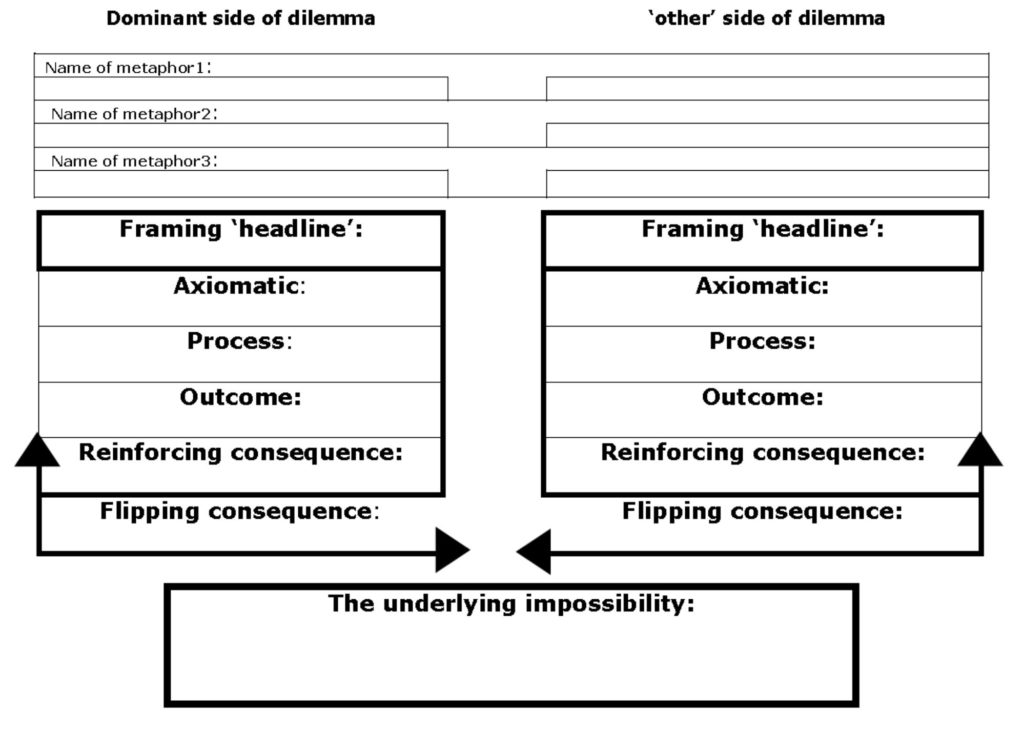 [2] The treatment of the situation as a ‘crime scene’ is a way of approaching the question of whether or not this way of holding the situation is necessary, or whether it serves particular interests. See Boxer, P.J. (2017) Working with defenses against innovation: the forensic challenge, Organisational and Social Dynamics, 17(1) pp89-110.
[3] In a plus-one process, the nature of a preoccupying situation emerges from an originating narrative that frames the situation as articulated by a ‘speaker’ and clarified by a ‘listener’. The role of the ‘plus-one’ is to produce a metaphor based on a counter-transferential ‘hunch’ about the nature of the shape of this framing narrative as it relates to what is going on in this situation (‘wigo’). This metaphor is based on the feelings evoked in the plus-one by the relation of the speaker to the whole situation in the narrative as it is spoken, and at the same time points to an alternative ‘other’ narrative to the one articulated by the speaker. 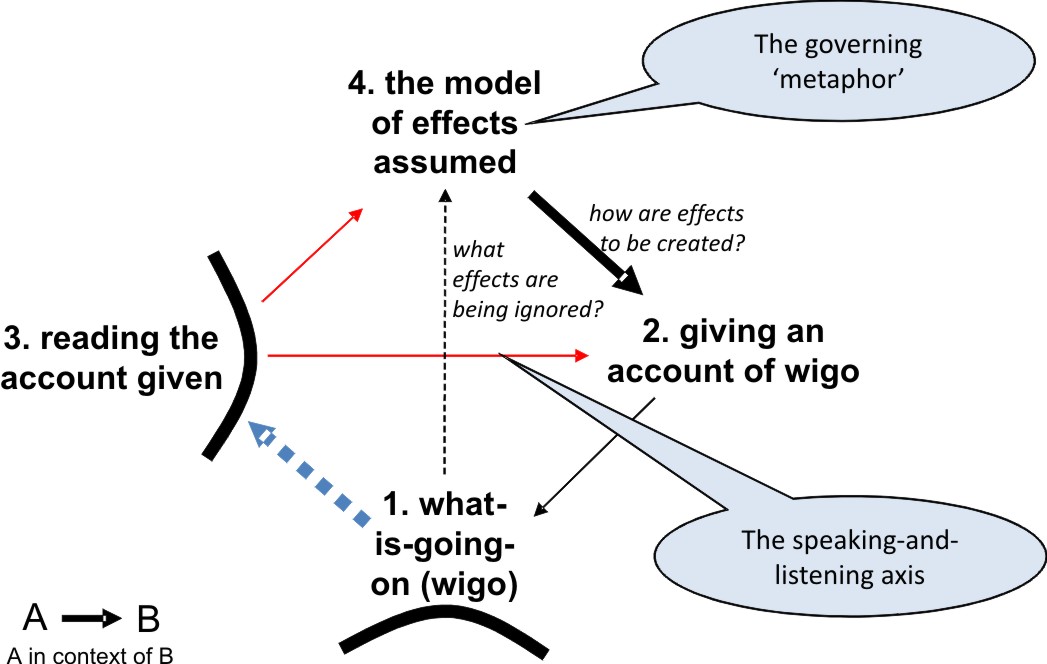 The relations within the plus-one process represent a way of framing what is going on (1 – wigo). Based on the concept of a ‘discursive practice’, the dominant frame is the way of framing ‘authorised’ by the power and knowledge of the dominant culture. This ‘way of framing’ may be characterized (i) by the authorized positions from which sense may be given to it through how the narrative is read (3), (ii) the unifying theme (4) through which its narratives can be made to cohere, reflected in the plus-one’s metaphor for the narrative as a whole, and the objects and concepts in terms of which the narrative is expressed by the speaker (2). The the speaking-and-listening axis (3-2) subject to the framing model (4) provide a shorthand for the way inter-subjective meaning is established.
[4] The dominant frame thus determines the performativity of inter-subjective relations formed subject to its power/knowledge relations. Referring back to the dilemma representation in [2]:

[5] The metaphors are created each time by the person in the ‘plus-one’ position, who has been listening to the way the speaking-and-listening process has made sense of the situation narrated by the speaker. This metaphor is chosen because it best speaks of the overall sense that has emerged for the plus-one from the speaking-and-listening about the situation. The plus-one has then elaborated on the metaphor as if it were a dream, making no attempt to relate its contents to the situation. This enables a good ‘feel’ to develop for what the metaphor is getting at.
[6] This is a matter of looking for the choice that was implicit in the metaphor. In effect we are looking for the ‘nightmare stage’ of the narrative situation speaking to the metaphor. For more on this way of reading a narrative in terms of the stages of ‘anticipation’, ‘dream’, ‘frustration’, ‘nightmare’ and ‘miraculous’, see betraying the citizen.  The plus-one metaphor thus points towards an alternative ‘other’ narrative that enables the witness to formulate an alternative framing narrative of the originating situation. The validity of this ‘other’ narrative for the original speaker depends on establishing corroborating evidence of a ‘flipping’ consequence that can disrupt the performativity of the originating frame, flipping those involved with wigo into an alternative framing narrative subject to a different axiomatic.
[7] This alternative narrative is implicitly bound to the originating narrative through the way it will capture an oscillation. The ‘otherness’ of the alternative narrative reflects the way it is repressed by the dominant narrative, lying ‘below the surface’ of the speaker’s consciousness until it is brought to light, in this case by a plus-one process (Naylor, D., S. Woodward, S. Garrett and P. Boxer (2016). “What do we need to do to keep people safer?” Journal of Social Work Practice.). Taken together with the dominant narrative, however, it will point towards the underlying impossibility.
[8] The origin of this approach to understanding dilemmas lies with the Milan method of systemic family therapy (Cronen, V. E. and W. B. Pearce (1985). Toward an Explanation of How the Milan Method Works: An Invitation to a Systemic Epistemology and The Evolution of Family Systems. Applications of Systemic Family Therapy: The Milan Approach. D. Campbell and R. Draper. London, Grune & Stratton.). The following representation is a way of thinking about the oscillation over time between its two sides (Hampden-Turner, C. (1990). Charting the Corporate Mind: From Dilemma to Strategy. Oxford, Basil Blackwell.). 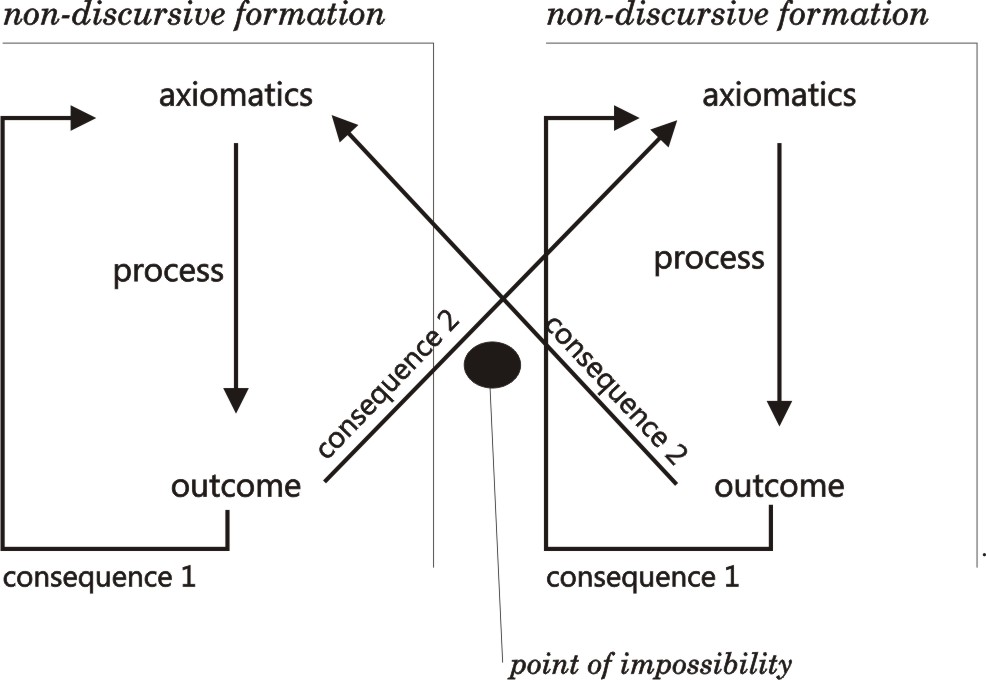 [9] The dilemma’s implicit relation to an underlying impossibility is the relation to the objet petit a of an underlying lack, apparent in the oscillation around the black spot and referred to as ‘what is Really going on’ (wiRgo). For the person in the role of witness, the emergence of the ‘other’ framing reflects an underlying ambivalence implicit in their framing of the originating situation.
[10] Campbell, D. and M. Groenbaek (2006). Taking Positions in the Organization. London, Karnac.
[11] Winnicott, D. W. (1960). “The Theory of the Parent-Infant Relationship.” International Journal of Psycho-Analysis 41: 585-595.