We have seen in distinguishing task systems, sentient organisation and sovereignty that an enterprise with supply-side sovereignty has no difficulty establishing its boundary or perimeter as an ‘open system’.  Furthermore, its definition of primary task is derived from the way it asserts sovereignty over its behaviors.  But what does it mean to say that an enterprise has multiple primary tasks?  In terms of business platforms and K-type value propositions, it means dealing with client-customers one-by-one, or at least primary task by primary task, ‘primary task’ being specific to customer situation rather than to the enterprise as a whole.  This is the challenge facing an enterprise when faced with the need to innovate or to compete in turbulent highly-connected environments in which it must surrender sovereignty in order to be able to respond one-by-one to the demands it encounters at its edges.

How is an edge-driven enterprise to be defined?
How, then, is an enterprise to be defined, if it is not to be in terms of its primary task and its boundary or perimeter?  To answer this question, we need to return to this graphic from the previous posting, and to consider the nature of the tension between the vertical (hierarchically imposed) accountabilities imposed on individual enterprises within an ecosystem, and the horizontal linkages (i.e. accountabilities to task outcome, ultimately to the client) dominating the ways in which K-type value propositions are aligned to customer situations: 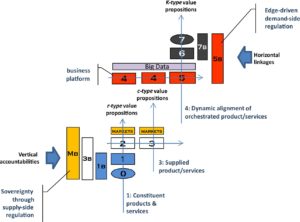 The relation of novel emergences of macrostates of the first and second kind (products & services and product/services), which define the vertical accountabilities, can be thought of in terms of their ‘height’ above a base level of maximal microstates, shown on the left below.[1] In contrast the microstates of customer situations can be thought of as at a depth ‘below’ a surface of novel emergences of macrostates of the fourth kind (i.e. demand situations), shown on the right below:

Novel emergences of the third kind, however, aligning multiple supply-side product/services via effects ladders to demand situations, compose maximal microstates at depth on the right to minimal macrostates at height on the left:

The outside is inside
These alignments compose supply-side sovereignty with demand-side situations within an ecosystem of suppliers, value propositions and client-customers which have the topology of the Klein bottle:[2] 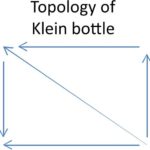 The key characteristic of this topology is that it is a one-sided ‘non-orientable’ surface.  To travel on this surface and return to a point of origin can flip the traveler upside down – there is no inside distinct from an outside, since inside is outside and vice versa: 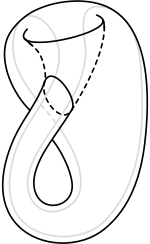 For an enterprise to engage in edge-driven demand-side alignment, therefore, implies that the enterprise can no longer define itself by a relation between an inside and an outside.  Rather it must do so by the way it takes up the causes of client-customers’ demand situations as its own.[3] These causes involve forming networked interventions that dynamically orchestrate and align supply-side products and services to reduce client-customers’ value deficits.

Asymmetric leadership
Value for the enterprise comes to be defined by the value created through reducing the client-customer’s value deficit.[4] This creates a new kind of challenge for leadership. It requires that the north-south bias towards sovereignty be replaced by an east-west dominant system of governance, and it requires a double alignment of know-how that enables quality to be driven from the edge through triple-loop processes of learning.

Notes
[1] In evaluating platform architectures within ecosystems, in which the supplier’s relation to indirect value is modeled, this ‘height’ relation is separated out into a ‘behavior articulation’ of novel emergences of the first kind and a ‘constraint articulation’ of novel emergences of the second kind. The ‘value articulation’ captures novel emergences of the fourth kind, while the relation between the three articulations capture novel emergences of the third kind.
[2] “In mathematics, the Klein bottle is an example of a non-orientable surface; it is a two-dimensional manifold against which a system for determining a normal vector cannot be consistently defined. Informally, it is a one-sided surface which, if traveled upon, could be followed back to the point of origin while flipping the traveler upside down. Other related non-orientable objects include the Möbius strip and the real projective plane. Whereas a Möbius strip is a surface with boundary, a Klein bottle has no boundary.  For comparison, a sphere is an orientable surface with no boundary.” (from Wikipedia)
[3] ‘Cause’ here refers to Aristotelian cause, in particular the final cause. This is the other side of the third of the dilemmas of ignorance, i.e. affiliation versus alliance.
[4] This concept of value is that which defines multi-sidedness – the value is more in the impact on the demand-side network of relations than on the supply-side networks of production. (This is the revolution currently taking place in the economic logic of societies subject to digitalisation and globalisation.)