The leadership of learning from experience involves learning from direct experience of practice – what is sometimes called action learning. This approach depends on establishing a ‘transference to the work’ in the sense that the learning has to be allowed to emerge through engaging with the problematic nature of a situation in practice. It contrasts with consultancy, in which the learning needed is b(r)ought in, based on a transference to the consultant. How this choice is taken up, between consultancy or action learning, will reflect the way power is exercised by the sponsoring system[1] within the client organisation.

Correspondingly, to be effective, any action learning project has to be able to satisfy four ‘edge’ criteria while keeping them in balance[3]:

The facilitating role
Crucial to the success of such projects is the person in the facilitating role[4], whose task it is to enable the members of the project to engage in a a ‘plus-one’ process. This type of process is needed to work through each of the following potential sources of error[5] in how they approach their learning:

The importance of networking across boundaries
Another reason is because such projects remain locked inside organizational silos, and are not used to reshape the organization by developing E-W dominance[6]: 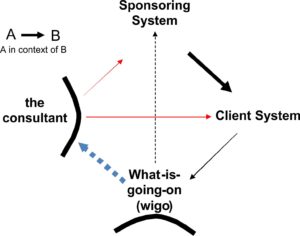 The relation between these two axes parallels the relation between the two axes in the the plus-one process.
[2] The source of this list is ‘Why Change Programs Don’t Produce Change’, by by Michael Beer, Russell A. Eisenstat, and Bert Spector, Harvard Business Review, November–December 1990. Some of the challenges involved in doing this are described in the paper on The Future of Identity
[3] The N-S-E-W refer to the balance that needs to be sustained by the governance system in order to overcome a North-South bias. The use of this approach in one organisation is described in this paper on Marketing Project Groups.
[4] The challenges of this enabling role are described in this paper on  meeting the challenge of the case.
[5] These lead to the three kinds of error in ‘Unintentional’ errors and unconscious valencies:

[6] The source of this list is ‘How Networks Reshape Organizations – For Results’, by Ram Charan, Harvard Business Review, September-October 1991. Some of the challenges surrounding the formation of network interventions are described in this blog on stratification.