by Philip Boxer
Larry Hirschhorn recently referred me to a book on the impact that network forms of organisation are having on the nature of work: “Fragmenting Work: Blurring Organizational Boundaries and Disordered Hierarchies”. His comment was as follows:

“It’s a serious book. The authors argue that the return of the network form of organization, while it has some economic logic sometimes, is often just a political solution that has become available, and that it is not necessarily more rational, but may benefit some interests, often at the expense of workers who are poorly treated, promoting an atmosphere of rootlessness that is no good for the more steady social system that is necessary for substantial innovation, rather than the rapid marginal effects of edge initiatives. So there’s lots of stuff about how edge work is different, and hard on the worker.”

He went on to ask whether this is a necessary consequence of ‘edge’ forms of working. I don’t think it has to be. Rather it needs to be seen as a consequence of misalignment between forms of organisation and the response to demand: a failure to meet a double challenge.

This double challenge can be understood in terms of the following double diamond, in which each side presents a challenge, to which is added the need to match the relationship being demanded on the right with a corresponding (mirror-image) basis of authority on the left. Thus increasing demands from the customer on the right for customisation and timely coupling with their individual context-of-use (an ‘edge’ relationship) are not matched by a correspondingly appropriate span of responsibility and accountability to the customer’s situation on the left: 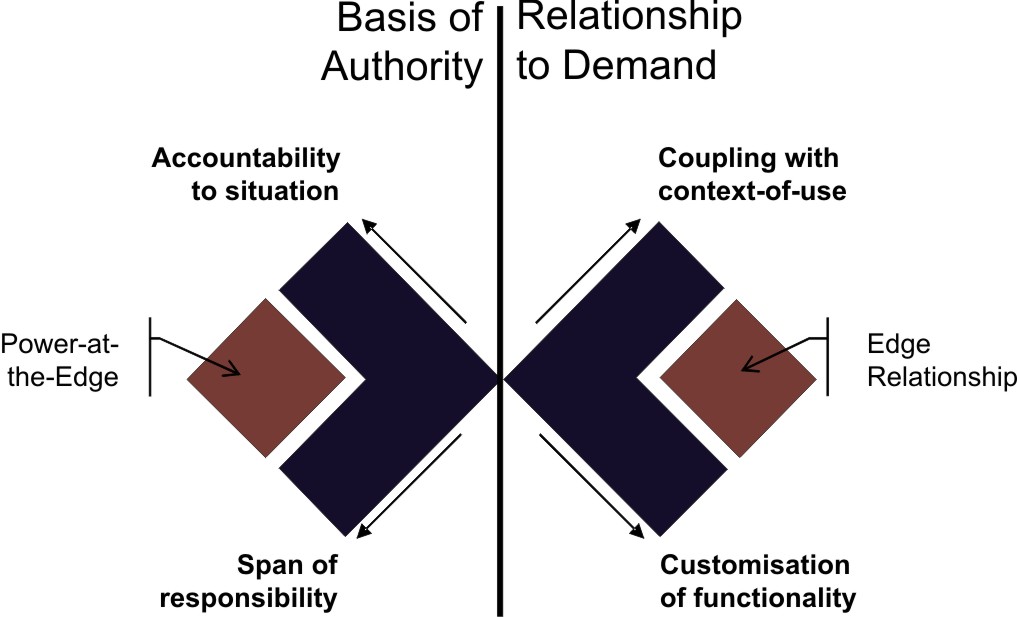 So the double challenge involves not only responding to the customer’s demand, but also creating the organisational context that will sustain that response. It is this second part of the challenge that is not being taken up. Thus:

Under stable conditions of demand, this flattening just amounts to using technology to take costs out of existing forms of organisation. But demand is not stable, and the big (‘21st century’) challenge is managing the risks arising from addressing new forms of demand within this new environment. The book is right in saying that this flattening can be very destructive. If it is just about taking out costs and not really addressing the change/development agendas, then it is very punishing on the people working within them because they are continually being expected to do more than their role is set up to do. The effect is that people are increasingly expected to work across a span of complexity that stretches beyond the hierarchies to which they are being held accountable, producing burnout, dependency on informal networks and long-term exhaustion.