Some years ago, I published a paper titled: The stratification of cause: when does the desire of the leader become the leadership of desire”[1]. The paper’s aim was to understand an enterprise not so much in terms of its business model(s), as in terms of its being a response to an undecidability, experienced by its client-customers, in relation to which it created value.  The ‘desire of the leader’ had to give way to the ‘leadership of desire’ under conditions of environmental turbulence in which a highly connected environment gave rise to tempos of demand that quickly rendered any static business model(s) obsolete. The demands of client-customers had to be responded to one-by-one in how the enterprise created value.  This had to be a process of continuous innovation responding to the demands as the demands arose in their contexts-of-use.[2]

A persistent problem facing the way we think about how this ‘leadership of desire’ translates into the way an enterprise is organised is the confusion of hierarchy with emergence. The originating innovation (aka novel forms of emergence) of a new way of creating value became ‘fixed’ in the form of a business model subject to hierarchical accountability established by the originator of the business model, in order that it might be repeated.[3] Under conditions of environmental turbulence, however, such hierarchies are insufficiently dynamic.  The need for continuous innovation therefore requires that hierarchy be distinguished from emergence in order that the nature of originating innovations be grasped more effectively.[4,5]

The confusion of levels of hierarchy with emergent strata hides the fact that descriptions in terms of ‘levels’ are unable to account for the emergence of strata either as a natural phenomenon or as an artifact of the process of observation.[6] The emergence of strata can be defined, however, without invoking the prior concept of levels.  It does this through the use of the concepts of spatial and temporal scope, spatial and temporal resolution and state.[7]

In his greenhouse in 1892, a 25 year old man called Bob Martin invented a conditioning powder for dogs. Whilst working for a local veterinary practice Bob Martin had become increasingly interested in basic healthcare for ordinary pet dogs. He constantly pestered his new employers with questions and visited local mining districts to talk about canine ills. Miners would show him their simple remedies and inspired him to conduct his own experiments. The new conditioning powder was intended to supplement the poor diet endured by many dogs at the time and to ensure that every pet could be kept in peak condition…

Spatial scope is defined by a spatial boundary. Spatial is used in the broadest sense of the word to include conceptual and formal, as well as physical spaces, provided the system has a physical manifestation (spatial refers to the set of components, in contrast to temporal, which refers to the dynamics of those components). The spatial scope of a system representation is the set of components within the boundary between the associated system and its environment. If an observer shifts from representing the system to representing a component, such that the component is now the system-of-interest, the scope of observation has narrowed. Conversely, when the scope is increased to include components that were previously part of the environment, the scope has broadened. There is also a temporal dimension to scope, temporal scope defining the set of moments of time over which the system is represented. In Jaques’ terms, therefore, a broader spatial scope of a system-of-interest defines a greater span-of-complexity, while a broader temporal scope defines a longer timespan-of-discretion.

The State of a system is the information that distinguishes between alternative system representations at some spatial resolution and moment in time. A macrostate M and microstate μ denote states with two different resolutions and scopes, with macro-to-micro relations such that the macrostate has either a coarser resolution or a broader scope, or both. A property of a system-of-interest, then, is defined as emergent if (and only if) it is present in a macrostate and not in a microstate. This leads to distinguishing novel emergence from weak emergence.

In the case of Bob Martin’s powder, with its novel emergent properties, we can assume that he patented the means of its production (or kept it secret).  As the demand for the product expanded, however, and production was scaled up, while its production would have become standardised and routinised, its quality would have remained dependent on the way the enterprise was organised in order to generate novel emergent properties from its component parts:

… The Bob Martin range quickly expanded from the original conditioning powders to remedies and preventative healthcare products for a wide range of canine and feline ills. In 1938 Bob Martin’s opened a showpiece factory in Southport.

Distinguishing stratification and levels of hierarchy
In order to describe stratified relationships, we also need the parallel definition of a maximal microstate μ*, which is maximal with respect to an emergent property in M* if the emergent property is not present in μ* and is present in any μ with broader scope and the same resolution.  Stratified relationships between systems-of-interest and their component systems can be described in terms of the relationship between matrix 1 of maximal microstates and matrix 1b of minimal macrostates in the following set of matrices (in which all of the states are described at the same level of resolution):[12] 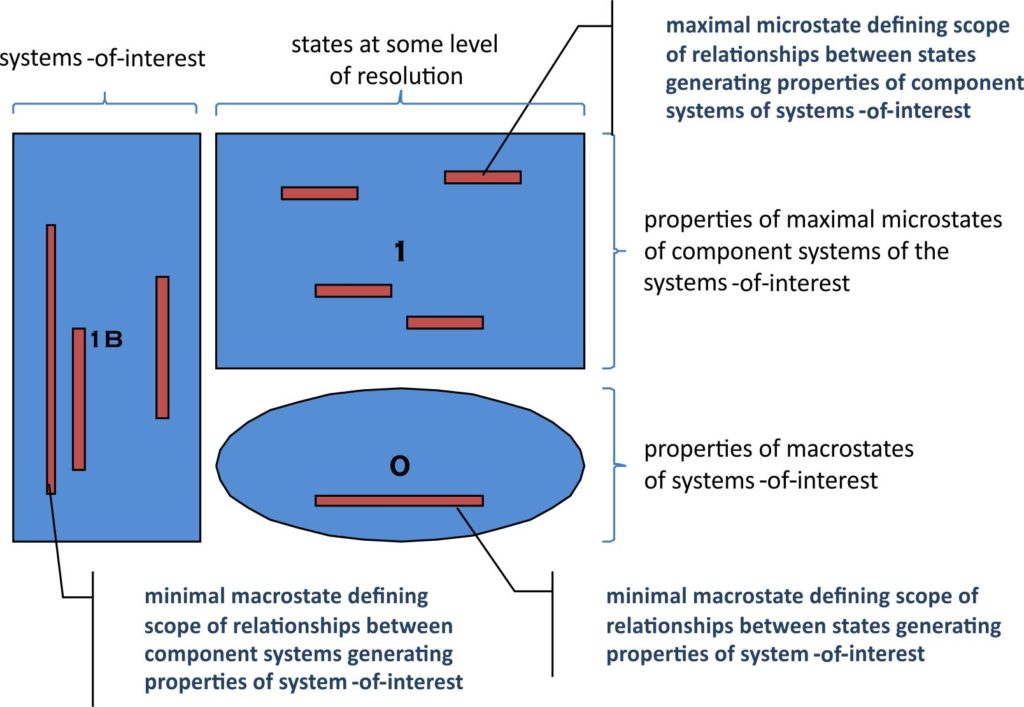 This stratified relationship between systems-of-interest and their component systems is based on a structural distinction between their representations.  This differs from a hierarchical relationship between systems-of-interest, levels of which are distinguished by the observer solely in terms of the modeler’s perspective and interpretation, independent of any structural distinction.[7,13]

Defining the first asymmetry – the technology is not the product
Remembering that the states in the above matrices are all defined at the same resolution, the importance in separating out matrix 1 from 1b is therefore because it distinguishes novel emergent behaviors of any given (composite) system-of-interest that “cannot be localized to any single component of the composite system but instead produce effects that arise from the cumulative action and interactions of many independently acting components.”[14] A novel emergence would be a ‘product’, the nature of which cannot be reduced to the ‘technology’ of its component systems. The first asymmetric dilemma, therefore is the fact that “the technology does not define the product”.[15] The following hints at this transition from a focus on organising the technological means of production to a focus on the business of selling the product, leading up to the opening of the showpiece factory in 1938:

His son, Robert, was born in 1901 and at the age of 20 followed his father into the family firm. Over the years he gradually took over the business side and was responsible for Bob Martin’s innovative advertising campaigns from the 1930’s onwards.

Notes
[1] Published in Psychanalytische Perspektieven, 1998. 32(33): p. 137-159. An earlier form of this argument was presented as a paper at the 8th International Conference on Systems Research, Informatics and Cybernetics in Baden-Baden on August 14th-18th 1996, sponsored by the International Institute for Advanced Studies in Systems Research and Cybernetics and the Society for Applied Systems Research.
[2] Failure to do this through processes of maladaptation was what gave rise to vortical environments. See Must we fall into the vortex?
[3] This is to be seen in The ideologies of Architecture, and the difficulties encountered in the impact of (inappropriate) governance approaches on system-of-system environments, as well as in the north-south bias in leadership qualities and the difficulties of leading organisations without boundaries.  This confusion is compounded by the work of Elliot Jaques in his work on hierarchy, which nevertheless makes a distinction between levels and pseudo-levels in arguing the necessary presence of 7 levels in all enterprises.  These levels are argued for in the differing nature of timespans of discretion/span or complexity.  I begin to disentangle Jaques’ levels from hierarchy in timespan of discretion and the double alignment of know-how. The double alignment is because there needs to be alignment not only to the founding assumptions of the enterprise, but also to its edges where it meets the demands of client-customers.
[4] This is an issue facing not only current ways of understanding the organisation of an enterprise in terms of what is happening to boundaries, authority and containment (the boundaries, authority, role and task (BART paradigm), but also to the way we understand authority itself.
[5] An originating innovation is what lies at the heart of a ‘network intervention‘, itself a response to a something lacking made present as a social object.
[6] Based on extracts from Alex Ryan’s paper “Emergence is coupled to scope, not level”, September 2006.
[7] Implicated also are the concepts of the observer’s perspective and interpretation that influence the representation of a system by an observer. Perspective is that through which some information at a particular resolution is hidden e.g. the state of internal organs to the naked eye; and interpretation allows for there to be multiple valid interpretions, not only in the sense of optical illusions, but also in the sense of there being multiple ways in which the representation of a system by an observer is itself structured by the observer-as-a-structuring-system – Miller, J.-A. (2009 [1968]). “Action of the Structure.” The Symptom 10(Spring). We will return to this in a later posting.
[8] This example is taken from Bob Martin History.
[9] A closely related concept is scale, which is a transformation by multiplication. The connection is that as a property is scaled up (multiplied) within a system, it can be detected at coarser resolutions. The distinction (which is rarely made) is that scale is independent of how the system is represented, whereas resolution is an attribute of the representation (scale is ontological, but resolution is epistemological).
[10] In essence, weak emergence assumes that the properties of a macrostate can be simulated on the basis of modeling the behaviors of its component systems if enough could be known about their behaviors and interactions. In effect, a presumption of weak emergence is reductionist. See Mark A. Bedau’s (1997) ‘Weak Emergence’ in J. Tomberlin, ed., Philosophical Perspectives: Mind, Causation, and World, Vol 11, Malden:MA, Blackwell. pp375-399.
[11] In evaluating platform architectures within ecosystems (modeling the supplier’s relation to indirect value), novel emergence was identified with structural holes of three kinds (corresponding to the three asymmetries) in the relations between component systems with their maximal microstates.  These are described in this posting, in stratifying relations of novel emergence subject to supply-side sovereignty, and in surrendering sovereignty – business platforms and K-type propositions. What this use of novel emergence adds, however, is a fourth asymmetry between the effects ladder and its associated demand situation and a something more that always escapes this formulation of an organisation of demand. This fourth asymmetry might be expressed as “what we demand is never what we desire”. This fourth asymmetry is between the effects ladder and its associated demand situation, which define a ‘pseudo value articulation’, and the embodied subject’s actual experience of value and of value deficit aka desire.
[12] Note that in Matrix 0, some of the states are considered ‘inputs’, while others are ‘outputs’.  This becomes significant when further layers of stratification are considered.
[13] For an earlier treatment of this issue in terms of the three asymmetries, see why is a stratification not a universal hierarchy?.
[14] See Fisher, D. S. (2006). An Emergent Perspective on Interoperation in Systems of Systems. http://www.sei.cmu.edu/publications/documents/06.reports/06tr003.html, SEI Technical Report CMU/SEI-2006-TR-003. Key here in the stratified relationship is the absence of dominant (vertical) control relationships over the component systems, allowing (horizontal) cause-and-effect relationships between component systems to become dominant in the generation of properties.The characteristics of these distinctions between different kinds of system are summarized in the following: 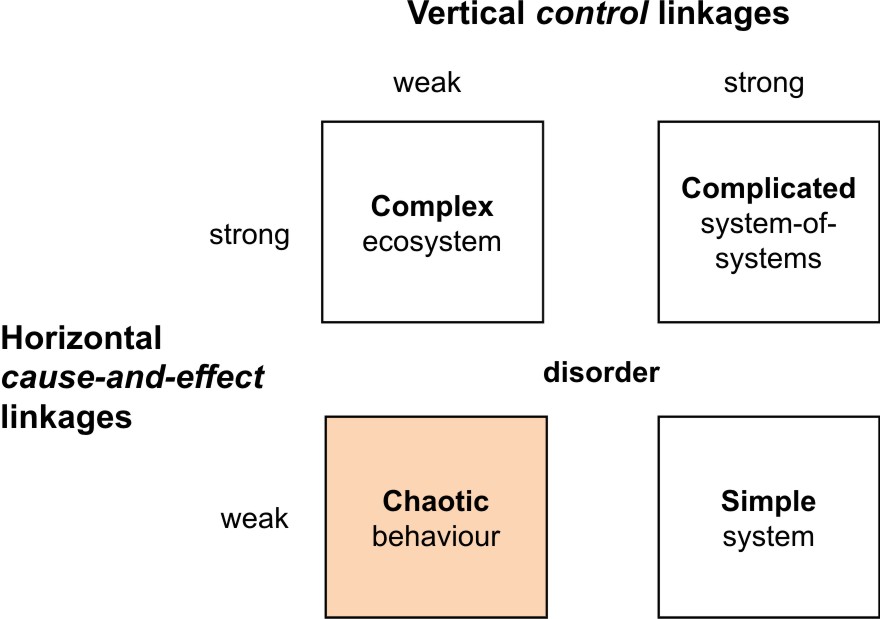 For more on the distinction between simple-complicated-complex-chaotic, see the drivers of organisational scope.
[15] This is the first of the three asymmetries.

GETTING BEYOND THE DEFENCES AGAINST INNOVATION