The blog on Requisite Authority introduces a diagnostic tool that examines the different possible forms of congruence between role and task, depending on how an enterprise defines its boundaries and its relationships across those boundaries.  The underlying drivers of this congruence are the need to differentiate behaviours in response to differentiated demands, and to integrate those differentiated behaviours in the interests of the enterprise as a whole.  This thinking applies to any enterprise, but situational resistance is easier to understand when it is applied to a membership organisation responding to the needs of its members – the modern democratic state responding to the needs of its citizens being an instance of this, another instance being a state actor within an ecosystem, as in the case of the UK’s National Health Service and Social Services responding to local primary care doctors. In the case of a membership organisation, then, consider what happens when

Some such loss of alignment is inevitable in the process of a membership organisation responding to growing demands from its members under conditions in which the environments in which members are operating are also changing. Thus loss of alignment may be because members’ demands ‘on the ground’ either get ahead of or lag behind their leadership[1]. It may also be because members themselves are using models of demand that are unable to account for what they are experiencing.  In the latter case, situational resistance describes resistance by members in which their behaviors ‘on the ground’ insist on finding ways of addressing the experienced value deficit, challenging their own current models of demand as well as the leadership’s approach to sustaining the (competitive) identity of the organisation. A response from members that insist on their current models and/or from leadership that aims to conserve the existing models and identifications supported by the organisation is then counter-resistance.

To think about what kinds of balance emerge between the governance processes of the organisation and members responses ‘on the ground’ to changing demands, three kinds of alignment can be distinguished between the two sides of the diamond: 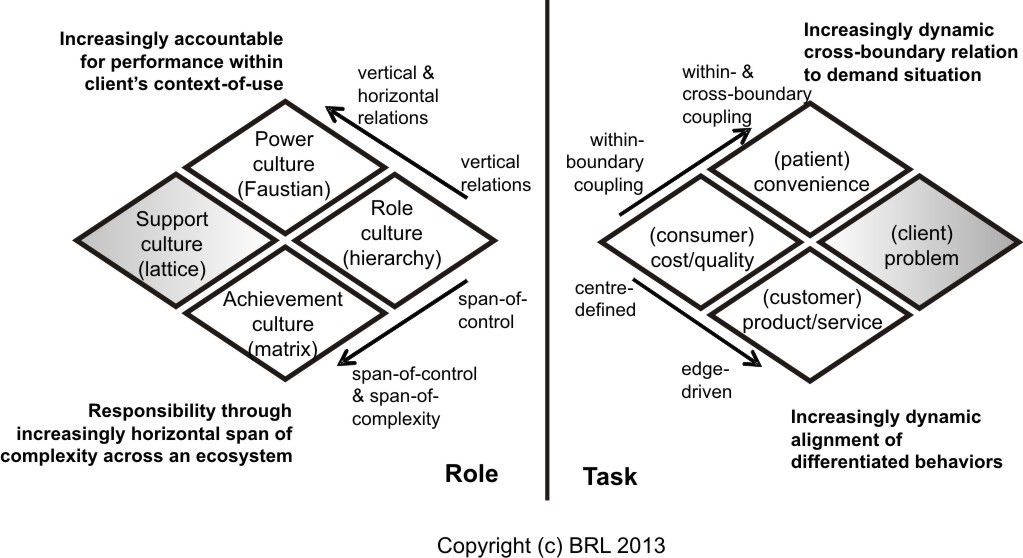 These three kinds of alignment correspond to three possible ways in which leadership may understand how role and task should be aligned:

What then happens when there is not this alignment?  There are three ways in which members’ behaviors may demand more support from the organisation than it can currently integrate:

And there are three ways in which the organisation may be capable of integrating more complex forms of support than those demanded by its members:

The resultant 9 varieties of competitive ground on which an organisation may find itself can be expressed in terms of two axes[11]:

Changes in position within the resultant diagram provide insights into the challenges that the leadership of an organisation faces in responding to changes in its members’ understandings of the demands they face ‘on the ground’, derived from the challenges they face in addressing the value deficits.  To the extent that the leadership of an organisation seeks to conserve its identity and its members seek to conserve their models of demand (aka exercise counter-resistance), resisting the challenges arising from members’ situational resistance as they pursue value deficits, it is likely that the organisation has become impaled by some previously traumatic alignment.[12]

Notes
[1] This issue of the relationship between an enterprise and its environments is explored in THE environment does not exist, its point being that the environment does not exist in general, but always as a number of particular contexts that may not be apparent to leadership. The members ‘on the ground’ may thus be responding to a different ‘logic’ to that expected of them by their leadership and vice versa, where the leaders are responding to interests not perceived by members to be their interests.
[2] Ground in which the army survives only if it fights with the courage of desperation is called death ground. In death ground, fight. Make it evident that there is no chance of survival.
[3] Ground that is equally advantageous for the enemy or me to occupy is key ground. Do not attack an enemy who occupies key ground. Hasten up my rear elements.
[4] When a feudal lord fights in his own territory, he is in dispersive ground. Do not fight in dispersive ground. Unify the determination of the army.
[5] When the army traverses mountains, forests, precipitous country, or marches through defiles, marshlands, or swamps, or any place where the going is hard, it is in difficult ground. In difficult ground, press on. Press on over the roads.
[6] When the army has penetrated deep into hostile territory, leaving far behind many enemy cities and towns, it is in serious ground. In deep ground, plunder. Ensure a continuous flow of provisions.
[7] When he makes but a shallow penetration into enemy territory he is on frontier ground. Do not stop in the frontier borderlands. Keep my forces closely linked.
[8] When a state is enclosed by three other states its territory is focal. In focal ground, ally with neighboring states. Strengthen my alliances.
[9] Ground to which access is constricted, where the way out is tortuous, and where a small enemy force can strike my larger one is called encircled. In encircled ground, devise stratagems. Block the points of access and egress.
[10] Ground equally accessible to both the enemy and me is communicating. In communicating ground do not allow your formations to become separated. Pay strict attention to my defences.
[11] These two axes refer to the way behaviors are differentiated in relation to demand situations (movement), and the way differentiated behaviors are themselves integrated, i.e. held in relation to each other (difficulty) – see integrating differentiated behaviours.  ‘Ground’ here refers to the nature of the competitive landscape within which identity is challenged, the nine varieties of ground being taken from Sun Tzu’s work on ‘The Art of War’ (OUP 1963[500BC]). The notes to each variety of ground are quotes from his work. These quotes are included to see how the metaphor has been used.
[12] This refers back to the challenge to leadership in which what has to be overcome in any development process are the challenges of past traumas. What is particularly at issue is navigating the Scylla and Charybdis of anxiety and innovation, constituting an ethical challenge to leadership.