Preliminaries
An edge role is on a task boundary in which the systems of meaning on either side of the boundary are different: some form of translation is required. The task facing a multi-disciplinary team is often such that its members are in edge roles with respect to the areas of specialism they represent. In such a team what is being but into question across any given edge is the identity of the specialism. The challenge for the individual in this situation can be expressed in terms of taking up such a role within the life of the enterprise. The normal assumption is that, if only the nature of the task itself was sufficiently deeply understood, then ways could be found to reach an accommodation between the differing systems of meaning in the interests of the task as a whole. This is, for me, the implication of identifying the problematics of the ‘mid-game’ with those facing the edge role.

But when the team is the enterprise itself, even if such an accommodation can be found between its members, there is a further challenge: the challenge of the particular nature of the demand being presented by the client. Now the team as a whole is on an edge between the system of meaning implicit in the way they work together, and the system of meaning required to satisfy the demand. So the experts may agree how to treat the patient, but the patient may not survive the long term effects of the treatment – the patient needs to play a different game to the one the experts want to play.

The relationship to demand 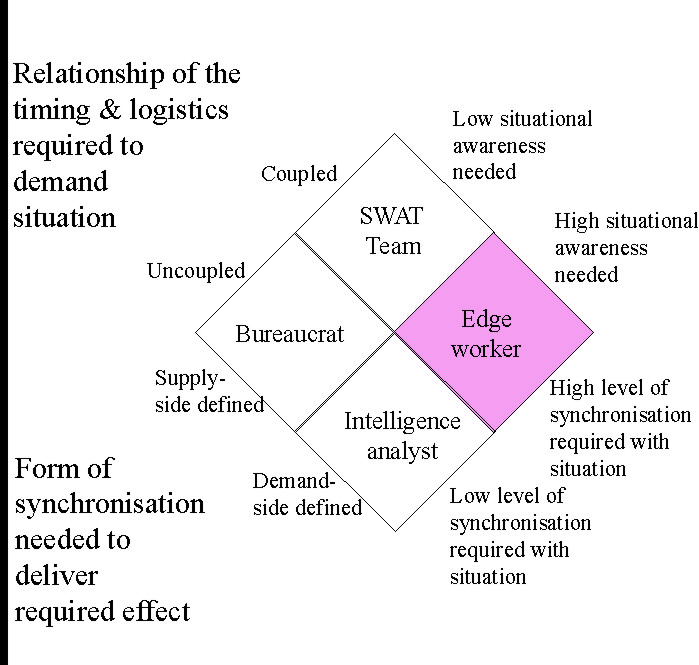 So we get the four characterizations of bureaucrat, intelligence analyst, SWAT team and edge worker. But what happens when we look at the way the enterprise is able to sustain such different forms of relationship to demand?

The diamond above, describing the relationship to demand, is the right hand diamond in this diagram. The left-hand diamond describes the way the enterprise sustains relationships to demand. Thus the two diamonds are symmetrical around the central vertical axis, and if some intervention creates a lack of symmetry between the positions on the left and right, then there will need to be some form of process of adjustment to bring them back into alignment. What is on the left side?

The alignment of the infrastructures 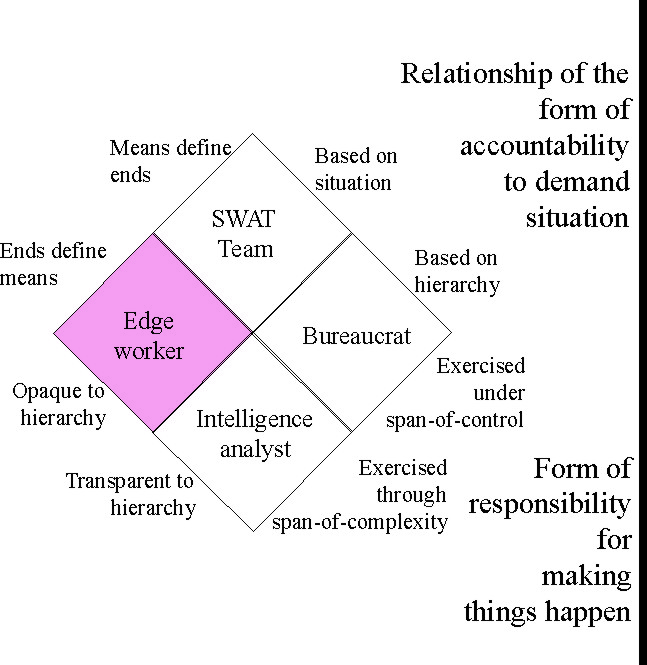 So we get the same placing of bureaucrat, intelligence analyst, SWAT team and edge worker. And we can read ‘football player’ for SWAT team. But what about the positioning of the counter-insurgency player and of the chess player?

If we contrast a ‘hearts-and-minds’ (HM) approach to counter-insurgency with a ‘helicopter gunship’ (HG) approach, then the HM counter-insurgency player will be in the edge role position, but the HG approach uses intelligence to find out where the baddies are, and then sends a SWAT force out to zap them… so what would bring someone employing the HG approach to take on the HM problematics facing the edge worker? The answer has to be based on its effectiveness in response to asymmetric forms of threat, although behind that answer there is clearly an issue of how power is used – an ethical issue associated with the long-term effects of using overwhelming force.

Ironically, the architect might be a better metaphor for the edge role position, because the form of the structure being asked for is much more arbitrary, and the challenges of aligning the available infrastructures in creating a satisfying response to the demand very evident. The architect faces the challenge of enabling the enterprise to take up a role in the life of the individual demand.

The elevator conversation
There was an article in the FT today about a study by Gartner surveying 1,400 CIOs:

CIOs had noted a shift from back-office functions towards front-office projects such as improving customer data management, looking to help the business stand out with strategic and innovative use of information, business processes, and intelligence in products and services.

To enable the business to stand out in this way is to enable it to take up edge roles… every business has to work out how to face this challenge in their own particular way.